The NBC show Manifest recently made headlines when the canceled series was acquired and renewed by Netflix for a fourth and final season. The missing plane drama series has a devoted fan base that is thrilled that they will finally be getting answers after season 3 ended on a major cliffhanger.

In the interim, fans can wonder how some of their favorite characters from the show compare to other notable icons in pop culture. While Manifest might not seem like it would have anything in common with classic Disney films, the show’s characters share many traits and personalities that are present in many classic films such as Peter Pan and Mary Poppins. Simba and Cal may seem as far apart as possible, but they have more in common than a fan would initially think.

Angelina (Holly Tayl0r) was the newest Flight 828 passenger to join the cast of Manifest during season 3 and she’s made quite the impression. After being rescued from her religious parents who were keeping her locked up, Angelina moves in with the Stones who welcome her with open arms. Angelina has an innocent nature about her but ultimately gets misguided and turns into quite the antagonist.

While Wendy Darling from Peter Pan might not be a perfect match for Angelina, the two do share a lot in common. For one, they’re both misunderstood by their parents which causes them to run away. They also both have a very dreamlike attitude towards them that makes them naive and, in Wendy’s case, susceptible to villains like Captain Hook.

Ben Stone (Josh Dallas) is a college professor turned detective when Flight 828 lands and his life is turned upside down. As the main protagonist of the show, Ben regularly seeks out his fellow passengers to solve mysteries and protect their livelihoods from the thousands of concerned citizens who fear them.

Mulan and Ben are both immensely brave and selfless. Like Ben, Mulan saw an opportunity to help those around her and sprang into action. They both have no problem breaking the law, like when Mulan enlists in the military by pretending to be a man to protect her father, if it means helping the greater good.

Cal Stone (Jack Messina) is the youngest male Stone family member, but his youth doesn’t stop him from being one of the brightest characters on the show. As one of the best depictions of “the Chosen One” in Hollywood, Cal is clued to things happening before anyone else, making him a valuable member of the Flight 828 passengers. Though he’s had a tough upbringing, Cal remains kind and caring.

Cal is extremely reminiscent of Hiro from Big Hero 6. They’ve both had traumatic childhoods, with Cal going missing for five years of his life and Hiro losing his parents and later his older brother, which has forced them to grow up too soon, and yet they’ve maintained some of their childlike wonder. Hiro and Cal are both incredibly intelligent, brave, and ready to sacrifice themselves whenever needed.

7 Grace as Sarabi (The Lion King)

Grace Stone (Athena Karkanis) hasn’t always been a popular character but she won over many fans during season 3. Though she didn’t always make the right choices, there is no denying that she was a devoted mother who would do anything for her children. She also likes to give people the benefit of the doubt which doesn’t always work out.

Like Grace, Sarabi is a devoted mother who would do anything for Simba, making her one of the best Disney animated moms of all time. Both matriarchs know what it’s like to lose their sons and husbands but managed to stay strong through an incredibly difficult time. They’re also both extremely encouraging of their young sons, with Sarabi helping Simba to eventually assume the throne of their kingdom.

Fans don’t always know what to think when it comes to Jared Vasquez (J.R. Ramirez) but he has proven to be mostly on the right side of things. As a detective and Michaela’s ex-fiance, Jared is dedicated to protecting the Stone family which sometimes comes in conflict with his career.

RELATED: The Worst Things Each Manifest Main Character Has Done

It might seem like an odd choice to say a rule-breaking, street rat like Aladdin and Jared are similar but both men possess a nobility that belies their differing occupations. They’re both handsomely charming and showcase immense selflessness by regularly throwing themselves in the line of fire to protect the ones they love. Aladdin displays this selflessness in his multiple encounters with Princess Jasmine.

5 Michaela as Elizabeth Swann (Pirates Of The Caribbean)

Next to Ben, Michaela Stone (Melissa Roxburgh) is the next most important character in Manifest. She used to be a detective, has a complicated relationship history, and is still dealing with guilt over the death of a childhood friend. Despite all the bad thrown at Michaela, she is fiercely independent, stubborn, and never backs down from the opportunity to do the right thing.

From one of Disney’s best franchises that won’t die, Pirates of the Caribbean, Elizabeth Swan is Michaela’s counterpart. Both have made a name for themselves in male-dominated fields and never back down from a challenge. In the Pirates movies, Elizabeth frequently fights alongside Jack Sparrow and saves her lover Will from certain death multiple times.

Olive Stone (Luna Blaise) is Cal’s twin sister though one would hardly consider them twins after the plane returns. Like her brother, Olive is incredibly intelligent and kind. She is sort of the black sheep of the family, especially when her mom starts to get callings despite not being on the plane. Though Olive loves her family, she constantly finds herself trying to prove her worth to them.

Wreck-It Ralph is one of the best Disney movies of the 2010s and introduced the memorable character of Vanellope von Schweetz. Like Olive, Vanellope is initially misunderstood before finding someone (Ralph) who believes in her. They’re both determined young women who refuse to comprise their personalities for others.

Robert Vance (Daryl Edwards) goes from enemy to ally quickly over the course of Manfiest’s run. The former director of the NSA, Vance becomes a key ally for Ben and is determined to figure out what happened to Flight 828 while also keeping the passengers out of harm’s way.

RELATED: All The Villains In Manifest From Season 3, Ranked

Just like Robert Hood is an unlikely Disney hero, having taken it upon himself to help the poor by stealing from the wealthy, Vance becomes an improbable hero in Manifest. Both characters take on secret identities, with Vance hiding out after an explosion, in the hopes of helping the people around them. They’re also both kind and self-sacrificing, with Robin Hood always giving the goods he steals to the poor.

Saanvi Bahl (Parveen Kaur) is the resident scientist/doctor amongst the passengers who is determined to figure out what happened to them after discovering they all share similar genetic makeup. Saanvi is incredibly devoted to her work, regularly missing meals to uncover the truth. Her curiosity and hunger drive her to treat as many people as she can.

Gadget is one of Disney’s most underrated characters, having first appeared in Chip ‘n Dale: Rescue Rangers film. Like Saanvi, Gadget is hardworking and immensely curious. She loves tinkering with her inventions and regularly uses them to help solve problems.

Zeke Landon (Matt Long) is an interesting character who has similar “callings” as the passengers despite never being on Flight 828. With a tragic past of his own, Zeke is determined to make the best of his second chance. In doing so, he becomes an optimistic and supportive character who regularly helps Michaela with everything going on.

An unlikely match for Zeke is Burt from the Disney classic Mary Poppins. Burt and Zeke both adjust to the world around them rather quickly with Burt embracing magic and Zeke embracing the callings without too much hesitation. They’re both empathetic characters who brighten up the day of everyone they’re around – especially now that Zeke has special empathetic powers.


Next
The Walking Dead: 10 Most Heartbreaking Events (That Weren’t Character Deaths)

Danielle Bruncati was born and raised in Southern California and has been a story-teller for as long as she can remember. She is currently a freelance writer for ScreenRant and is also pursuing a Master’s Degree in Television Writing and Producing from a top 10 film school. When she’s not writing, Danielle can be found binging the latest sitcom or teen tv series with her dog by her side or walking around Disneyland with a Mickey-shaped snack in hand. 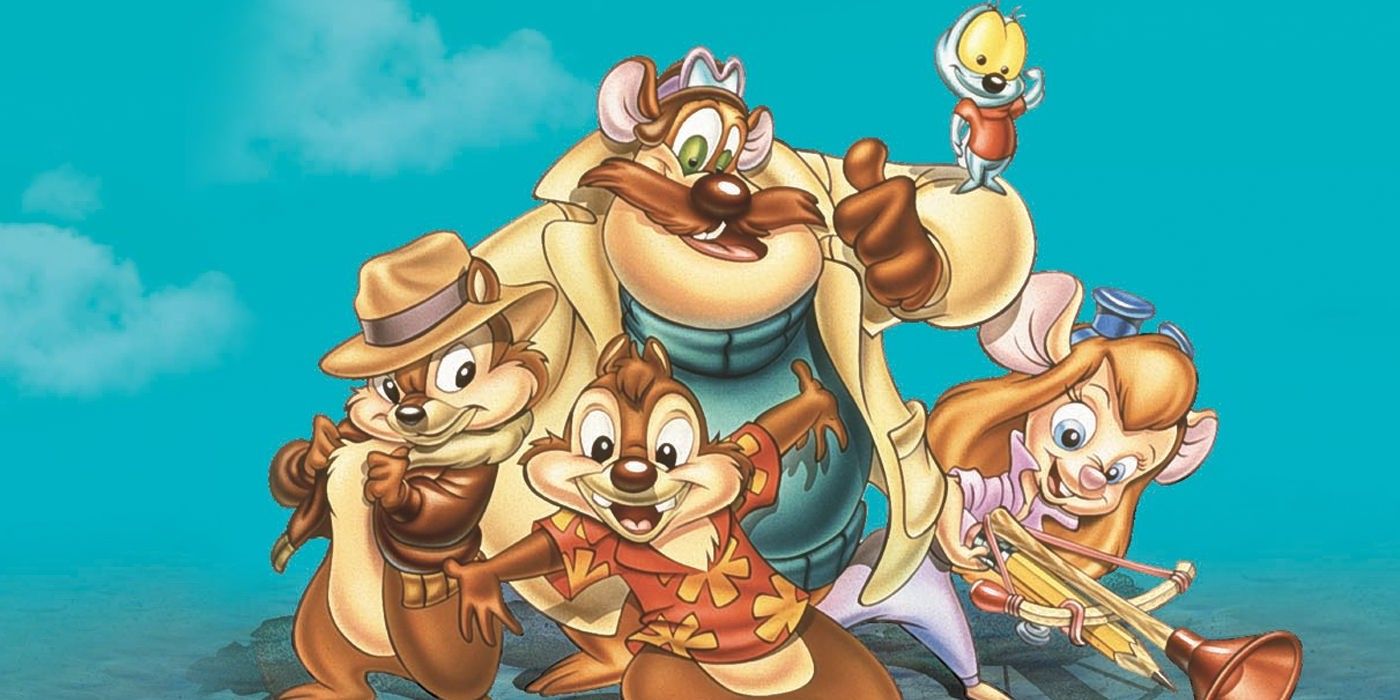